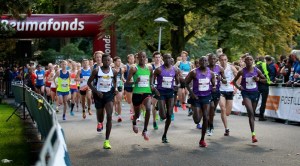 This Sunday, the 2nd of October, there is a running event in Utrecht – Singelloop.
Some streets will be closed to traffic and the St. Catherine Cathedral might be difficult to reach.
If you are coming by car allow some extra time to deal with possible delays.

Also we would like to remind you that it is not permitted to park in front of the cathedral except in the marked spaces. For help finding a parking place in the center please consult the information on this website: www.parkeren-utrecht.nl

We tried to find out what further information we could give regarding the accident with the structure of St. Augustine’s church.

It is too early to tell when there will be once again celebrations in St. Augustine’s church. The ceiling needs to be checked by officials. Their advice will be important in the decision to when to use the church again. As for now we think the church will not be ready before Christmas.

In the attached pictures you can see the pieces that came down and spread through the whole church. No one is allowed to enter until further notice because it is not safe. 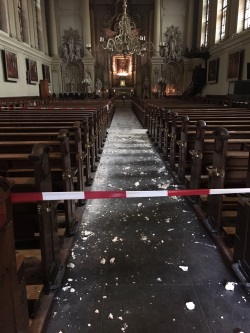 As announced before, and already happened last Sunday, the English Mass will be held in the St. Catherine’s Cathedral (Lange Nieuwstraat 36) for the time being, at the same time, 12.30.
The Parish center is not damaged and can be used for other church activities such as choir practice, bible studies, prayer meetings and others.

On Sunday morning the choir practice can be held in the chapter room in the Cathedral. After mass there will be confessions in the Cathedral as it was usual in St. Augustine. Coffee and tea can be organized in the “Bonifacius huis” in the Nieuwegracht, around the corner of the Cathedral.

In conclusion, we expect everything to work as it was before, just in a different place.
We’ll be providing updates as the situation progresses and as we have more news.

If you have any questions or concerns feel free to reach us via the email: team@englishmassutrecht.nl

On Saturday, the 22nd of October 2016, the Banneux N.D. Organization for Asian Pilgrims invites you to join us in this pilgrimage.

Mechelen lies on the major urban and industrial axis Brussels – Antwerp, about 25 km from each city. The area of Mechelen was assumedly Christianized by the Irish or Scottish missionary St. Rumbold, which explains the name of one of Flanders’ most important churches : Saint Rumbold’s Cathedral of Mechelen.

City rights were granted by the Duke of Brabant, John II in 1303, and Mechelen was in those days a trading competitor of Antwerp, a few ten kilometers north of the city. In the 15th century, the city was ruled by the Dukes of Burgundy, and it prospered. Charles the Bold moved political bodies to Mechelen, and the city served as the seat of the Superior Court for centuries.

For a short while in the first half of the 16th century, Mechelen was the capital of the Low Countries (present day Netherlands, Belgium and Luxembourg) under Archduchess Margaret of Austria. Charles V, the Holy Roman Emperor, spent his early years in Mechelen.

Mechelen’s fortunes turned with the rise of Brussels during the later 16th century. It did become a religious center with the establishment of the Archdiocese of Mechelen in 1559. In 1572, the city was sacked by the Spanish. The fortified walls of the city (only one gate is standing now) were destroyed under the rule of Joseph II, the Holy Roman Emperor, in 1781.

The first railway on the European continent was between Brussels and Mechelen (1835).

Cost for the travelling: 35 EUR
Special price for students: 25 EUR !

The new season has started and there is a change in our prayer meetings. From this September on wards we will be having a bible study and a prayer on the same evening every third Wednesday of the month.

Exceptionally this month we will have our bible study on the 27th of September from 19.45 at the St. Augustine church’s pastoral center; the entrance is at the backside of Saint Augustinus church (Rozenstraat 1).

We will meditate on John 11:1-11 about the death of Lazarus

We will be blessed to count you among us.
Stay blessed!

We have received information that a piece of St. Augustine church roof fell, and the safety of the parishioners cannot be guaranteed anymore.

Due to this reason there won’t be English mass this Sunday at St. Augustine church, and the celebrations here will be halted until further notice.

In alternative, the English mass will be held in the St. Catharine cathedral (Lange Nieuwstraat 36), at the same time, 12.30.

We are sorry for the inconvenient and will come back to you soon with more information.